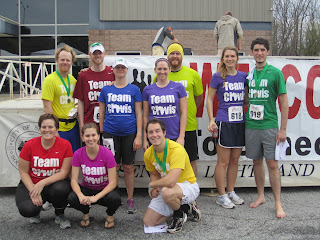 Team Clovis had a great showing at the Seneca 1/2 marathon/5k. Team Clovis? Interesting name huh? It all started with Rick and Maggie Turner; a cute and (I say this with love) somewhat kooky couple. They are in the process of adopting a child from Ethiopia and named this hypothetical child "Clovis". Seth would remind you at this point that Clovis is the name of the first Frankish king or if you want to be historically incorrect you could say he was the first French king, circa 500 A.D. I don't think the Turners considered this when they picked the hypothetical name for their future child but hey we can't all be married to a early modern European history professor.

Essentially, Team Clovis is helping Rick and Maggie raise the necessary funds to bring their baby home. (A link to their blog, The Turner's Adoption Adventure, can be found here on my blog, under "blogs that rock"). Running to raise money isn't usually my thing. I am amazed and so proud of those runners who raise hundreds, even thousands, of dollars for charity. I'm pretty good at spending money but terrible at asking people for it. It makes me feel squirmy. However, social media, specifically Facebook, has made that process pretty painless. You can reach hundreds of people with one message, tell your story, and run your race. Every race I run from now until the Turners' receive their referral will be for Team Clovis. If you feel led to contribute in any way please let me know.

Back to the race. I thought Maggie was exaggerating about the hills. In fact, I think I rolled my eyes a little when she was talking to me about it. Cocky Lauren was all like "hill, schmill. I've run 3 marathons and this will be my 4th half. No course can be that hard." She wasn't exaggerating and I was definitely being cocky. That was one hilly course, as in thigh muscles screaming by mile 8 hilly course. I would tell myself I could have gummi bears at the top of one hill, only to need every ounce of strength, including the strength to chew, to conquer the next one.

It was overcast, rainy and did I mention hilly? For this race I actually had a plan. 10:20-10:30 pace for the first 3 miles. Under 10:00 for the next 3. Back to 10:20 for the next 3 and under 9:55 for the last 4. Considering the hills and the heat (its been unseasonably and downright ridiculously warm here) I managed to complete 13.1 miles in 2:12:19. I am quite pleased with myself. Especially, when I consider that I was at the back of the pack when the race started so it took a good 20-30 seconds for me to cross the start line and then it took me at least a minute (maybe even two) to pee. (I almost collided with a man while exiting the port-a-potty. Who faces a port-a-potty so that the door opens into the road? Seriously? Who does that?That's just silly.) I think it's safe to say I may have been somewhere in the 2:10 range. *Happy dance*

It's rewarding when you can see your hard work pay off. Not only am I proud of my time but I had so much fun while running. All the runners were smiling and just happy to be running. My fellow teammates and I were high-fiving as we passed each other, screaming words of encouragement. I embarrassed Seth, as we were passing each other, by telling a traffic cop that "that man is the father of my children!". I had just chased down this woman that I had my eye on for like 2 miles so I might have been overly giddy. It might be easier for him to just run with me rather then fearing what crazy thing I'm going to scream when I see him.

After the race, Team Clovis went back to the Turner's where Maggie whipped up some eggs, pancakes, grits (of which I did not partake. Although I was later informed about the greatness of grits and may partake in the future), sausage, bacon, and tater tots. It was like a dream. There is nothing better then grease after a long run. It was a wonderful day, shared with wonderful friends, for a wonderful cause. This, people, is why I run. 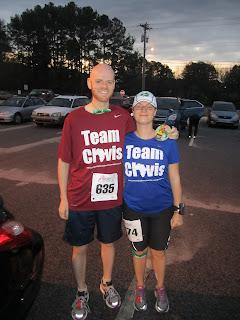 Seth and I before the race. 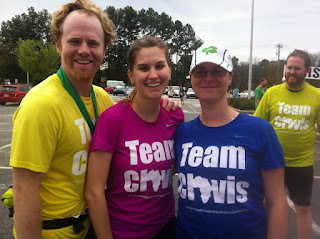 Rick, Maggie, and I after the race
*disclosure: I know I look like I could be pregnant in group picture. I'm not. Trust me. I'm just chubby. Who trains for a full and a half marathon and doesn't lose any weight? Ding, Ding. Lauren that's who. I'm not bitter. I just need to stop eating chocolate. and ice cream. and cookies. and Shamrock shakes. Hold me accountable people!
Posted by Lauren at 10:49 PM No comments:

the family that runs together....

From 2006 until 2009, I lived in a one runner household. The only running schedule I had to worry about was my own. Don't feel like running today? No problem - I can always run tomorrow. Races were an all Lauren affair. There was always someone to cheer me on and meet me at the finish line.

In 2009, my husband woke up one morning and decided he was going to start running. Fast forward to present day: he's lost over 100 pounds, and is running his second 1/2 marathon tomorrow morning. Considering everything, ie: my somewhat selfish and competitive nature, I handled the move into a 2-runner household quite gracefully. Now the questions: "How far are you going?" and "How was your run?" can be heard pretty frequently around my household. We both run three different days during the week and save our long runs for the weekend. He's more disciplined then I am, and gets up early enough to be back before the kids are done with breakfast. I have a tendency to take advantage of his kindness and lay around in bed until the last possible moment. On Saturdays, I'm usually back before lunch. We don't run together. Someone has to keep an eye on the children. That's where it gets complicated.

Tomorrow, Seth and I are both running in the Seneca 1/2 marathon. It takes about an hour or so to get to Seneca, SC and the race starts at 8 am. What to do with the children? I suppose only one of us could run the race, but how do you choose who gets to run and who has to stay with the kids? Flip a coin? (We are seriously considering this method for an upcoming 1/2 in April). In the end, two wonderful friends volunteered to stay with the kids at home so they don't have to get up at the crack of dawn, and we don't have to worry about them being kidnapped while we're racing.

Although living in a 2 runner household adds to the laundry (I wash a lot of socks and other smelly running gear) and can be logistically complicated, I'm grateful that my husband loves what I love. I'm glad that I can roll my eyes at him when he tells me he had a "slow" run and his time beats my best time by 10 minutes. I'm happy that I can badger him into signing up for races and watch as he gets excited about running. We may not actually run together, but we have running in common and that's enough for me.

*Race Report Forthcoming*
Posted by Lauren at 9:24 PM No comments: