working hard for the muscles

Who came up with this idea? As if running around in shorts and a tank top isn't enough now I'm running full steam up a hill and then pathetically jogging back down only to do it all over again?

I'm pretty sure the people in my neighborhood think I'm crazy.

With the addition of hill repeats, combined with strength training, and my newly discovered passion for squats there has been no rest for the weary.

In other news, I think I might be in the best shape of my life. Conveniently, just in time for bathing suit season. I call that a win.

outside fun with the munchkins

School is out, the kids are home, and we're potty training. That can only mean one thing: we are outside ALL DAY LONG.

I thought I would share with you the few things that are keeping me sane (and comfortably seated) while my children (5 and 2 1/2 years old) get their play on.

First up is the batting tee. 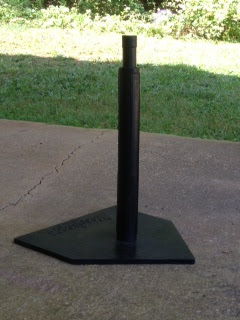 If you have a child that plays, loves, likes, dreams about baseball you need this tee. Before this tee arrived in my home I had to pitch to my children. Not that that is a bad thing. I love spending time with my kids but throwing pitch after pitch after pitch in the blazing sun is torture. Kudos to anyone that does that regularly. Now, my kids play together (!) and I get to cheer them on from the comfort of my chair. Everyone wins. 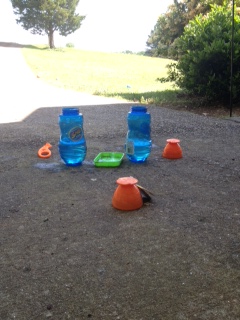 Next up is an old childhood favorite: bubbles. Not only do they make bubbles but you can get messy which is always a plus. I keep a dishtowel nearby for little girls with soapy hands that need to be wiped. Unfortunately, bubble playtime never lasts long but it is fun while it lasts. 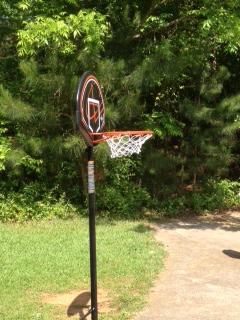 The basketball hoop went up a few days ago and it has been a great way for us to play together as a family. We play a version of HORSE but we call it PIG and for my 2 1/2 year old it's PIGLET. My husband trash talks and my son celebrates every shot. Good times. 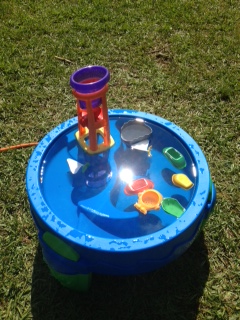 This water table is the best $30 I've spent in a long time. They throw things into the table, use the hose (under my watchful eye), float boats, and generally entertain themselves. I debated about getting a more expensive one laden with bells and whistles but in the end simple and cheaper was definitely the way to go.
I have no delusions that these activities will keep them busy all summer but for now, until the temperature becomes unbearable, I am one happy Mom.

I recently did something I never thought I would do.

I wrote a blog piece for someone else's blog.

I mean, c'mon, sometimes I can barely come up with anything to write on my own blog never mind someone else's. And of course there was the fear that the minimal success I'm having here at Running Slowly with Kids is because my mother constantly pushes the refresh button on her web browser.

Despite my irrational anxiety it was a great experience and I hope you'll take a minute to check it out.

Let me know what you think!

P.S. a big, huge thank you to Annica for giving me this opportunity! She is a cool lady.
Posted by Lauren at 9:14 PM No comments:

it's hard being married to me.

Running has taught me a lot about myself. My strengths, my weaknesses; things about my personality that make me cringe. On Wednesday, I realized how selfish I am. Again.

My husband was 15 minutes late getting back from his run that morning. I sat on my porch steps, seething, sending laser eye beams up the driveway, willing him to hurry up and get home so that I could go for my run.

Wednesdays is the only day when we both need to run. During the school year, we coordinate our schedules so that there are no fights, arguments, or resentment about who gets to run when and for how long. But now school is out, he's teaching a summer class, and it's too hot to run during the day with the kids in the stroller. Bedlam.

I usually run first, getting up at 5 to run, then going back to bed until the kids get up. That morning, however, it made more sense for my husband to run first so that he could shower and eat breakfast before work. I agreed to this plan. It was rational and logical. However, at 6:30, I wasn't thinking rationally and logically when I was having a one sided fight with my husband in my mind.

It went something like this... "You said you would be back by 6:10!" "Why is your run more important then mine?" "I would never do this to you!"

When he popped out from behind the house, he immediately apologized. I ignored him and took off up the driveway. A 30 minute tempo run and hill repeats calmed me down but not enough to accept two more apologies.

The poor man. He sincerely apologized and all he got in return was a sweaty wife with an attitude.

By that afternoon when my eye laser beams has retracted and I had some time to think about what a nut I was being, I remembered that running is a gift; one that we both share. Sure it can make things difficult at times but if the alternative is both of us being unhealthy, miserable, and depressed; I'll take cutting my run short by a mile any day.

Don't worry I gave him an extra big kiss when he came home from work that day.
Posted by Lauren at 11:50 AM 2 comments:

nothing much going on

I'm alive. Were you worried?

Adding to this "need more hours" drama is summer vacation. School is out. My children are home with me ALL DAY LONG. I can't tell you how much I love rest time. Or when I can go to the gym. Or bedtime. I love my children but they are exhausting. I now understand why my mother would "encourage" me to play outside in the summer. Speaking of outside...

it is HOT out there. At 5:30 this morning it was a steamy 69 degrees. The season of post-run cold showers is now upon us.

So basically that's all I'm doing these days: running in the dark, hanging out with my kids, wiping bottoms, and being extremely thankful for air conditioning. Try not to be too jealous.
Posted by Lauren at 3:16 PM No comments:

Where does the time go?

For the first time, since his birth, we were apart. 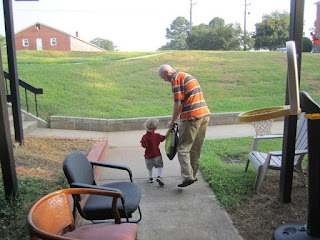 It almost tore my heart in two.

However, it was one of the best decisions I have ever made. For him and for me. 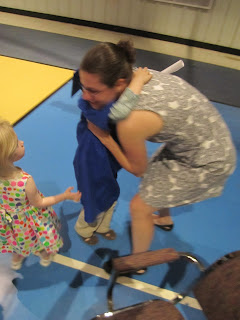 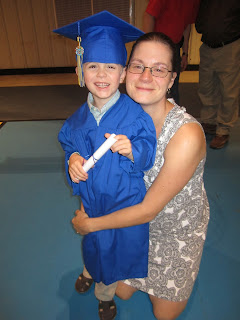 Even though we are embarking on a new chapter; moving forward to a new school, new teachers, and new schedule, I am excited.

Excited about the new things he'll learn and new experiences that will continue to shape him into the man God wants him to be.

I am blessed beyond measure to be this little's boy's mother.

Posted by Lauren at 2:19 PM No comments:

I've gotten kind of sick of spinach smoothies. Eating the same thing for over two months will do that to you. I was bumping around on Pinterest and saw a recipe for an avocado & pear smoothie. Other then the avocado and the pear, I didn't have any of the other ingredients so I decided to get creative.

This is what I came up with... 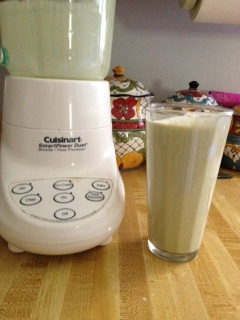 It was creamy and not too avocadoey. Next time, I might try it without the yogurt and maybe some ice. Otherwise, it was a nice break from the spinach.

Happy Blending!
Posted by Lauren at 1:21 PM No comments:

I have a sore hamstring.

Thankfully, I have been injury free most of my running life. I've had shin splints and unhappy knees but nothing that has kept me sidelined for long periods of time. I hope the trend continues but I'm not holding my breath. Let's face it: I'm getting older. 8 years of road running have made the creaks and the groans a little louder.

More and more, I am realizing the importance of strength and cross training. I need to keep my whole body, not just the muscles I use to run, fit and healthy. I need to start doing yoga again. I need to stretch. I never stretch. Terrible but true. After my morning runs, all I want to do is take a shower and climb back into bed.

This morning's 4 mile run was almost pain free. I'm hoping that a few more easy miles and more quality time with the ice pack will do the trick. Sore Hamstring? Ain't nobody got time for that!
Posted by Lauren at 3:37 PM No comments:

To say I'm thrilled is not enough. To say that I'm excited would be an understatement.

After the mess at Knoxville, this PR is even more gratifying.

I've redeemed myself. Proven to myself that those early morning runs, missing Saturday morning cartoons with my kids, and the healthy food is all worth it.

I am a runner and I couldn't be happier.

Posted by Lauren at 3:11 PM No comments:

On Friday, my 2.5 year old daughter gave up her binky. 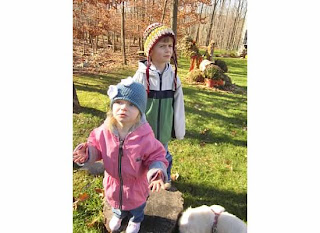 On Tuesday, I found a tick on my son.

Yeah, it's been one of those weeks.

Sometimes, being a parent is exhausting. Emotionally and physically. When my poor daughter was crying for her pacifier, all I wanted to do was cave. If I hadn't already thrown it into the garbage who knows what I would have done. Six days later, she's still adjusting. Naps aren't going well and there's dramatic scenes at bedtime. My poor baby girl.

When I found the tick I think I stopped breathing for a moment. Being from NY, where Lyme disease is rampant, I panicked. I grabbed a pair of tweezers and yanked. Thankfully, I removed the whole thing. A visit to the Doctor reassured me it hadn't been there long. I'm officially stalking my son's temperature and overall well being for the next two weeks.

Children should come with warning labels; as in "these cute little people will twist and pull at your heart, give you indigestion, make you doubt every decision you have ever made, and cause you immeasurable amounts of stress." If that wasn't enough, then they "borrow" your beloved stuffed rabbit, so not only are they suffering but now you are too. Awesome.

Then one, or both, of them give you a kiss and tuck their little hand into yours and suddenly it's all worth it. Even if you have to sleep without your rabbit.