I have a new obsession.

I know I'm a few years late to the party but I'm ALL in.

It started this summer when, overwhelmed by things out of my control, I started walking. Around the block, around the neighborhood, with the kids, and by myself. Getting outside; physically and metaphorically moving away from my anxiety was HUGE for me. Listening to someone yammer in my ears about inane things was HUGE for me.

Right now, I have 7 podcasts I'm hanging out with. I'm pretty fond of most of them.

but here's my issue.

The running community is GINORMOUS. Everybody and their mom runs. Where are the running podcasts?

To be fair, I've only listened to three, with another one recently subscribed to, but so far I'm unimpressed.

I feel like they are a little preachy and elitist. Here's what you should you do to be awesome. and fast. This person is barely running at all, only 40-50 miles a week (I actually deleted that particular episode when I heard that - I just couldn't deal). This person runs an a 50k, breaks a rib, and then a few weeks later attempts a 100 miler (HA! HA! This is all very normal. Nothing to see here).

I tend to feel deflated after listening to these podcasts. At times, I have even snorted out loud in disbelief. These are not my people. Or at least, I don't feel like they're my people. I am an average runner, not an elite. My runs, in general, are slower then I would like and there is a definite ebb and flow that controls my running, whether I like it or not. I'm left feeling like the 20-30 miles I put in every week mean nothing.

I would love to hear stories about everyday runners, the runners I interact with on Twitter and Facebook. Men and women who run to find themselves. Who run to beat cancer. Who run for those who can't. The runners who run because they need to. These are my people.

So, because I'm aware that I need to get over myself, I'm trying to hold on. To give these podcasts a chance because I could probably learn something.

I can't promise you I'm going to stop rolling my eyes though.

This morning I ran for the first time since the hills decimated my thighs during Sunday's marathon. 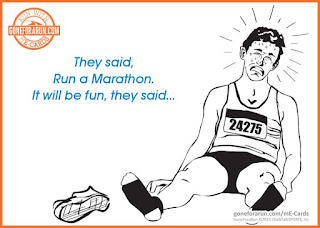 I'm terrible about post race recovery. No ice baths. I take the hottest shower I can stand. I eat what I want and never drink enough fluids. I did wear my compression socks for the rest of the day though so I'm not a complete and total failure.

This time around recovery was a little slower then normal. Monday was rough. Everything was sore and my inner right thigh actually hurt. I was in this weird fog all day. Tuesday was a little better and I survived a walking field trip to the Post Office with my daughter's preK class. Yesterday, we had a dire laundry situation happening so I forced to conquer the basement stairs. I managed to do it without saying "ouch. ouch. ouch" the whole time.

The first run after a race, especially a marathon, is always a little nerve-wracking. There have been times where I've avoided it like the plague and other times where I can't wait to get back out there. Fortunately, this morning it was the latter.

It was great to be out there with my running partner, shaking out my muscles and moving towards the starting line of the Greenville Marathon, which is in 16 days.

Just writing that makes me laugh.

When I sign up for these races there's this moment of insanity where I think "I CAN DO ANYTHING! HA! HA! HA!". This time around was no different. 2 marathons in 20 days? huh. Sure. Why not?

Despite the exhausting proposition of running another marathon in so few days, I am REALLY excited about Greenville. I'm running it with my running partner who always makes long runs seem easy and Greenville is one of my most favorite cities. As long as the weather is nice it should be an awesome day and if not, well, there's a Starbucks right around the corner from the finish line to make everything better.

I have run 9 marathons in 9 different states.

I am one state away from joining the 50 States Marathon Club. 1 STATE!

But before I go on and on about how excited I am that this HUGE goal is almost within reach, let's talk about this crazy West Virginia race I just ran.

#1 most important fact: IT WAS HILLY.

At mile 21, those hills became mountains. I did something I have NEVER done in a race. I walked the hills.

The particulars: this race is part of a 7 day series, the Appalachian series, hosted by Mainly Marathons. There was a HUGE 50 State, Fanatics, and Maniacs presence at this race, which makes perfect sense considering you can act like a fanatic or a maniac and run a half or marathon everyday for seven days.

The course went through a park that had beautiful views of trees with leaves that actually change color! The sun was shining but it was still cool and crisp. Pretty much a perfect day. The volunteers were amazing, super supportive and encouraging. My fellows runners were excited, encouraging, and kind. They made the hills bearable.

The cool thing about running a loop is that you become so obsessed with what number loop you're on you forget all about the miles. The first 6 loops flew by. Loops 7-10 were a little rough and the last 2 were all like "YEA! I'm almost done!"

The medal is pretty freaking awesome.

It has clips so that you can add more states as you complete the series. So cool. I may or may not have had a brief moment where I was all like "oooo! I want to add more states!" but then I came to my senses.

As I get deeper and deeper into this 50 State quest, I will definitely consider running another Mainly Marathons series. Though small, it is a great way to get the mileage and states you need while  surrounded by wonderful and dedicated people.

I've probably written about 20 posts in my head, while running, while in the shower, or picking up my kids from school. Somehow, by the end of the day, when I finally have time to think - I'm exhausted.

Running has been exhausting.

Over the last few weeks, the only thing getting me out of the bed at 5 a.m. to run has been my running partner.

I'm burnt like those little crumbs that collect in the bottom of the toaster.

I'm 4 days away from my 4th marathon in less then a year and my 9th marathon overall.

I don't feel as prepared as I normally do. My 19 miler, which was supposed to be 20, was hard. It was long and I felt every step during the last few miles. It left me feeling worried and concerned that this upcoming race is not going to go well.

This race is a loop race and my introverted self is worried about running with the same strangers over and over and over again. Faced with new situations, I tend to come across as stuck up when I'm really just a nervous wreck. Add to the mix, staying with my children the night before in a hotel room where historically NO ONE sleeps well. Oh and did I mention that my youngest son has a cold? Boogers. Sneezing. Crying at night because he can't breathe through his noise and suck on his beloved binky at the same time. All of this is a recipe for disaster.

But you know what? I refuse to accept this reality.

I'm in denial people! AND IT IS BEAUTIFUL.

So what if I'm going to drag my family to West Virginia to run a marathon and then turn around and come right home?

So what if I feel like I'm coming down with this cold that is currently plaguing my son?

So what if I have to smile and chat with people I don't know while trying to make it through mile after mile of the same terrain?

It's going to be great because I've decided that that's the way its going to be. Take that universe!
Posted by Lauren at 10:59 PM No comments: