1 Turkey Trot run with my 11 year old cousin, Emma. She finished the 3 mile race with a clock time of roughly 28:15. That's with 2 stops to retie her laces - she's amazing. I want to be like her when I grow up. 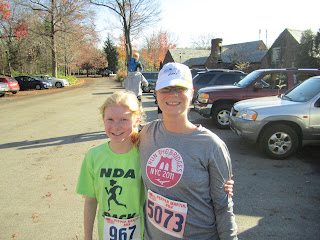 1 turkey dinner with the family. My family's thanksgiving cooking skills could beat your family's thanksgiving cooking skills up. Its like the food network elves come and make this incredible meal only its really my Gram, my Aunt, and my Mom. I really want to be like them when I grow up. Plus, we had chocolate cake for dessert... who has chocolate cake for dessert on Thanksgiving? um, we do and its because we rock. 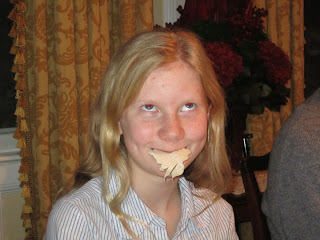 2 days of 3rd generation Parry boys hanging out playing Angry Birds. These boys are no joke. If there was an Angry Birds competition they would dominate. Although they do have a tendency to cheat - if they don't like the board or their score they'll quit and start a new game, but hey they're cute so its ok. 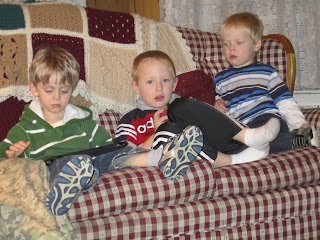 2 head colds for Seth and I. You've never had fun until you've been in a car for 14 hours with two kids and sinus pressure & congestion. seriously you should try it sometime - its a blast.

1 tin of Gram's cookies. The deal is if you bring back the tin she'll refill it. I think I've already eaten 4 today. Chances are slim that they will last the week.

8 wonderful days of spending time with family. I must say that's what I'm most thankful for.
Posted by Lauren at 8:03 PM No comments:

If I'm not running with my kids, I'm running by myself. I'm too slow for my husband (he lost over 100 pounds by running and now he's faster then me) and I get up too early for most other people. A part of me thinks that I would enjoy running with others; the companionship, the shared enjoyment of sweating, and pushing one another to be better. Deep down, though, I'm a loner. I enjoy running by myself; being able to think, pray, blow my nose into my shirt, and sing out loud without horrifying those around me.

I tend to take the same route with motherhood. Living far away from family and friends limits my opportunities to complain to other people about my children. Complaining via phone or facebook just isn't the same. (Although my mother always does a good job listening and laughing when it's appropriate.) There's just something about sitting across from a friend, laughing so hard you could cry, wanting to cry when you hear about something they're going through, and just feeling comfortable in each other's presence. There are a few people I feel that way about and luckily I was able to spend some time with one of them today.

I've know Elena for a long time. We were inseparable at one point, getting into trouble and eating cup o' noodles soups while sitting on my kitchen counter. As with most teenage girls drama happens and we drifted apart. Fast forward to about two years ago when we reconnected and found out we were both pregnant. There's something about pregnancy and motherhood that draws women together. Its common ground that helps us to understand that we're not alone. That there are other women out there struggling with the same things we are; insecurities about parenting, uncertainties about the choices we make for our children, and most of all hysterical antidotes.
Tonight I was reminded how important it is to walk with other women on this path of motherhood. Perhaps I can be persuaded to start sharing my runs. Any takers?
Posted by Lauren at 10:11 PM No comments:

My Love Affair with Running

True to the title of my fabulous blog I run slowly, even when I'm not pushing an extra 60 pounds. Ironically, I was once dubbed the fastest soccer player on Staten Island (of course my high school track coach said that but hey you take what you can get). I was a sprinter; able to cross small distances pretty quickly. I hated cross country and used every excuse conceivable to get out of running. Ouch my foot hurts. See the trainer. Ouch my knee hurts. See the trainer. By the time indoor track season rolled around the trainer and I were on a first name basis. The lure of soccer stardom led me away from high school track and I spent the next couple of years flirting with running but never making a commitment.

Fast forward to 2003 when I made the insane pronouncement that I was going to run a marathon before my husband graduated from graduate school. This marks my descent into marathon madness, though it took another three years before I got serious. I ran 2 halfs in 2006, Philadelphia and Staten Island, and made my first attempt to get in to the New York City Marathon. For those who don't know NY is no joke. Everyone wants to run NY. Seriously everyone. Including famous people. I doubt that Katie Holmes, Lance Armstrong, Apollo Ohno, and Mario Lopez had to go through the lottery like the rest of us poor slow fools. It took me 5 tries to get in. Yes, you read that right. For 5 years I faithfully applied to the NYC marathon and every year was turned down until 2010. I was, however, pregnant with my daughter and deferred until 2011.

Meanwhile, while I was dealing with self esteem issues ("why don't they want me? Its because I'm slow. They think I'm too slow. They saw my anticipated finish time and laughed me right out of the lottery.") I ran 2 other marathons, Cincinnati and Charlotte. Cincinnati was a hot mess. I made EVERY single rookie mistake you could think of. I carried a bottle of Gatorade with me for the entire race, 26.2 miles, and didn't drink a single drop. It's a miracle I crossed the finish line. I literally dragged myself from mile 18 by sheer will power.

Charlotte was a whole other story. By that time, my son was over a year old and we were living in Northeastern Georgia. Suddenly being a slow runner took on a whole new meaning. Being slow and training for a marathon means a lot of hours running. A lot of hours spent away from my family. A 20 mile training run can take me up to 4 hours to complete. Even if I get up before the sun I'm still not back until right before lunch. It is a sacrifice not only for me but for my husband who for several hours a week becomes a single father.

So why do it? Why spend hours running, dealing with painful big toe joints, black toenails, and sweat pimples? For the fame? HA! I'll never set any records and I certainly won't win any races (not even a small 5k. Not even in my age category in a small 5k). For the glory? They tell you pain is temporary but glory is forever but its kind of hard to revel in the glory when you have 4 loads of laundry to do and a 3 1/2 who refuses to use the potty unless he can play Angry Birds (he beats my high score regularly).

No, I do it because I need to and because I can. God has blessed me with two beautiful children but He has also blessed me with two working legs so that I can get away from them. I'm not a supermom; I don't decorate homemade birthday cakes or sew Halloween costumes. I'm not crafty and we don't have a glue stick in the house. They fight and I get mad, they cry and I get frustrated. We're not the Cosbys'. (extra points if you can tell me what movie that line comes from). Running makes it better. Training makes it bearable and crossing a marathon finish line makes it all worth it. My kids know I run and although right now they're too young to know why, someday they will know its because they drive me to it.

I figure its better then an alcohol addiction.
Posted by Lauren at 2:48 PM No comments:

"running in the stroller?"

My mom asked me the other day why I run marathons. There really isn't one answer to that question. Primarily, its because I'm crazy. I mean, seriously, what sane person would spend hours upon hours (109.5 in 2011) running around Royston, GA? The other reason I do it is because I need a goal and I enjoy the challenge. When I'm training I rarely miss a run. I'm wide awake when that alarm goes off and I'm up and out the door within 15 minutes. When I'm not training its a whole other story. I set the alarm to get up to run but I hit the snooze button one too many times. I tell myself I can go running with the kids. I'm not sure why I think this is a good idea. Together my kids weigh approximately 45 pounds. My stroller, a BOB dualie (the greatest freaking stroller on the planet. Seriously it is incredible.), probably weighs about 20 pounds. That's 60 pounds I need to push just so that I can get a few minutes extra sleep. See what I mean about being crazy?

Today, I put off my run all morning. My daughter's sick and fussy and I'm trying to get this family ready to go home for Turkey day. As I was explaining turtle feeding duties to our new turtle babysitter I made the mistake of asking her if she wanted to go for a run with me. My 3 1/2 year old son heard me and immediately asked "running in the stroller?" How could I say no to that? So here we are off for a 2 mile run. 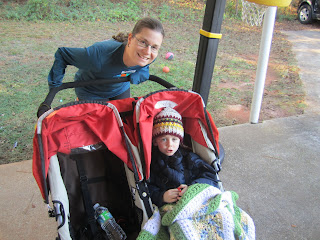 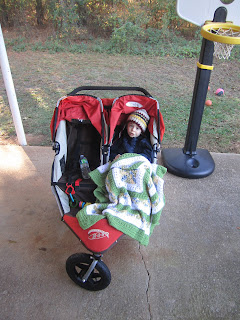 It was a little windy, we lost the blanket for a minute or two, and a trucker honked at us - all in all a successful run with my kid.
Posted by Lauren at 5:22 PM No comments:

One Mile at a Time

As I'm trying to write my first perfect blog post both of my children are sitting on top of me, whining in my ear, and fighting over toy cars. This is my life. Welcome.
Posted by Lauren at 3:22 PM 1 comment: