Book Review: The Gap of Time

I'm terrible at book reviews. Particularly, when it comes to books that I didn't enjoy. A book is a result of someone's hard work. Long hours spent writing and editing. Deleting and starting all over again. Who am I then to read it and say "um. yea. not so much"?

I just finished Jeanette Winterson's The Gap of Time and I am under whelmed. 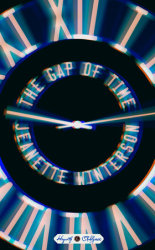 On paper, this book seems awesome. It is a retelling of Shakespeare's The Winter Tale, where jealously, paranoia, and heartbreak abound. Pretty much like every Shakespeare play in existence. The thing with Shakespeare, though, is that language and phrasing take so much brain power to compute that it almost hides the absolute insanity of the characters. It somehow becomes less crazy when there are thee's and thou's involved.

However, when you retell it in modern language the craziness is VERY evident. There is no flowery language to hide behind. The intensity of the characters and their emotions are front and center.

I find as I get older (and this makes me cringe because I'm only 34) that I'm becoming more and more intolerant of violence, excessive profanity, and the general abuse individuals inflict upon each other. Reading serves as an escape and the mere act of it has a profound effect upon me. If a book is emotionally draining, I feel that. It stays with me and it's hard for me to shake it off. I recently remarked to a friend that I feel as if I'm out of emotional credit. I only have so much to give, worry, and agonize over - I can't spare anymore for the characters in books that I'm struggling to get through.

I know that this is unfair. And by no means am I advocating that every book be filled with unicorns and glitter. I have a feeling that this is just a phase I am going through because, ultimately, books have the power to stretch you, change how you view things, and teach you something about yourself and the world around you and I need that. We all do.

Despite my ridiculous hyper-emotional state, this is a very well written book. Winterson gives Shakespeare's characters new breath and seamlessly integrates them into the modern world. Her retelling is engaging and thoughtful. I may not have enjoyed it, but I can see how it might appeal to others.

disclaimer: while I received this book for free through the Blogging For Books program, all opinions and views expressed are my own.

previous post: maybe that's why I keep doing it
Posted by Lauren at 6:38 PM No comments:

maybe that's why I keep doing it

As part of my application for the 50 States Marathon Club, I need to list the details of the 10 marathons I have run.

Considering I started in 2007, the particulars are a little fuzzy.

Thankfully, there is a website, marathonguide.com, that outshines all websites and contains race results from EVERY marathon from the beginning of time. Or at least from 2000 - which is super helpful for a forgetful Nelly like me.

As I was searching through the results last night, cutting and pasting each race, it was a little surreal.

On paper, its just a bunch of numbers; date, time, place. But to me, each one was experience and the memories came flooding back: the wall I hit at mile 18 during the Flying Pig when I was sure I was going to die. Crossing the finish line at the New York City Marathon and sobbing hysterically. Signing up for the Richmond Marathon two days after running New York and swearing that I would NEVER run another marathon again. Running the Knoxville Marathon and momentarily contemplating cutting the course so that the misery would end. Convincing my running partner to run her first marathon and then crossing that finish line with her at the Rocket City Marathon in Huntsville, Alabama. Begging everyone that loves me to help me take care of my life (ie: packet pick up, babysitting) so that I could get to the starting line of the Pittsburgh Marathon. Running loop after hilly loop in West Virginia among the beautiful changing leaves. And then number 10: the Carolina Marathon: the first marathon my husband and I actually ran at the same time. Not together mind you, but at the same time.

Running a marathon is life changing. It only takes one to join the club. You can legitimately include it in your obituary. Life seems different after you run 26.2 miles. You learn that you are far more capable then you could ever have imagined. More able to push past the doubts and do something amazing. Running 10 just compounds it. It makes me feel like a freaking super hero.

Maybe that's why I keeping doing it. 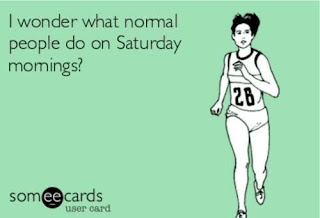 I can officially apply for the 50 States Marathon Club.

It went off without a hitch. Everyone slept the night before. No one got sick. The weather was PERFECT.

The course starts in downtown Greenville, S.C. and winds its way into Cleveland Park and the Swamp Rabbit Trail. This trail, also known as the SRT, is one of the coolest things about Greenville. It is a paved path that travels all over the city. It is popular with runners, walkers, and cyclists. It is free from traffic and in most cases surrounded by trees, leaving you with this wonderful "I love nature!" feeling. 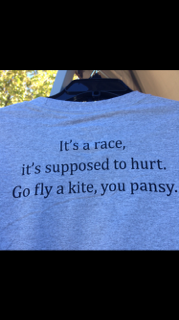 The majority of the race is run on this trail so course support was minimal. However, the volunteers and the supporters that were out there were very encouraging. There were adequate water stops but definitely lacking in the porta potty department. There was one bathroom on the beautiful campus at Furman University. It was clean, and there were no lines so that was a win.

My running partner and I chatted, enjoyed our surroundings, and marveled about how good we felt. Then, of course, my body decided that it was no longer a fan of this let's run two marathons in 1 month thing, and decided to rebel. I developed this knot in my right shoulder that made it hard to turn my head. Then the muscle in my right thigh that I strained during my last marathon decided it had had enough. Annoyingly enough, its a muscle that's part of the let's help your leg lift and move you forward team. I wasn't going to quit. Or give in. So I just kept moving. I had to keep moving.

Crossing that finish line was like that last bite of the most perfect piece of chocolate cake. It was fullfilling. Satisfying. but I'm done. Well, at least until January when I run the Mississippi Blues Marathon. But then after that I'm taking a break from full marathons. I think I might chase after a half marathon PR :)

Posted by Lauren at 9:27 PM No comments: