Life with 4 kids during the day has been strangely uneventful. Everyone is getting fed, put in clothes by at least 9:30, and playing with age appropriate toys. I haven't had to use the television as a diversionary tactic yet so I'm chalking that up as a win. I somehow manage to find time to clean my house; of course, I only do one cleaning chore a day so that helps. Today was clean the hallway bathroom day. I cheated a little bit by not doing the floor but I figure I'll scrub it with twice as much vigor next week.

Yesterday was my first venture into the big, bad world with 3 kids. No one perished in the attempt so that's another win. We weren't late either which was a huge relief for me. I loathe being late. In fact, just thinking that I could be late makes me sweat and not in the good "I just exercised" kind of way. Before I had children, I was always at least 15 minutes early. Waiting doesn't bother me. Just knowing that I am where I am supposed to be when I'm supposed to be there makes me happy. Now, with kids, I'm just on time. Those little legs don't cover enough ground fast enough to allow us to be early. Although, when it's just W and I, we run from the car to wherever we're going (he thinks it's a game and I'm not going to dispel that notion).
Once, I tried to run holding his hand while carrying E, but I almost dropped her so now we kind of shuffle when we're on the go.

Motherhood pushes my boundaries. It constantly forces me to redefine who I am and what I'm capable of. I'm not ashamed to admit that I was extremely nervous about our trip out of the house. I'm obsessed with logistics. I had no idea how it was going to work between feedings, naps, and travel arrangements. When Seth told me that he could not come home and help, I wanted to cry. In the end, though, I'm glad that I had to deal with it on my own. Other then practically catapulting W headfirst into his seat, it went smoothly. I learned that any situation can be handled when I'm calm and somewhat ready to handle the possibility of being late. It helped that I got to drive Baby K's Dad's new car. It has a back up camera; that was pretty cool.
Posted by Lauren at 10:52 PM No comments:

"Sugar and spice and everything nice"

In 2007, when I found out I was having a boy, I was momentarily flummoxed. I wasn't sure that I knew how to raise a boy. I have one sister and 6 girl cousins so girls I knew I could handle. Just dress them up in pink frilly dresses with black patent leather shoes and big bows and you're good to go (or at least that's what I had gleaned from my childhood). But boys? What do they play with? What kind of books do they read? That second question really troubled me. As an avid reader, I was worried that I wouldn't be able to share my childhood favorites ("Anne of Green Gables", "A Little House in the Big Woods") with my little boy. Thankfully, God blessed me with a little boy who not only loves cars, trucks, dinosaurs, and basketball but loves his Mom enough to humor her about her book choices.

The second time around I was excited to be find out we were having a girl. One of each! Finally, someone to buy pink things for! Cute headbands, fancy pants underwear and pink, pink, pink and more pink! I'm sure I thought my daughter was going to be a gentle, dainty, little flower. Well, 15 months later, my daughter looks amazing in pink and wears those frilly dresses with no complaint but she is no gentle flower. She is bold, funny, and turns the iPod on so she can dance. She knows she's cute and uses it to her advantage. When its time for her bottle she hides behind the table and peeks around the corner to see if you're looking. She is more adventurous and daring then W ever was. Case in point: the diaper pail. 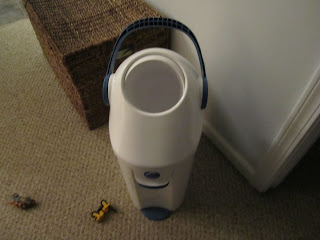 W had one in his room for three years and NEVER once played with it. Never tried to put anything in it other then diapers. With the latest addition of Baby K to the daytime Parry family, we moved the diaper pail into the hallway. Over the last few days, I've caught E playing with the handle, pulling it up and down. Yesterday, she shoved W's plastic underwear into the pail but I caught her before she pulled the handle. Tonight, as I was getting rid of her diaper I noticed that there was a car already in there. I opened up the pail and inside I found these: 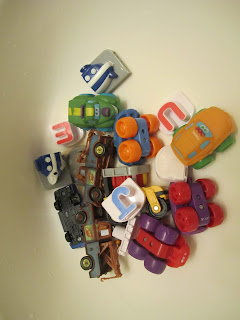 She's like a squirrel, hiding her nuts in the tree. I had to stick my hand in the pail, more the once, to get them all out. I sighed, shook my head, and cleaned the toys. On a positive note, bleach does not ruin leapfrog fridge magnets. Fast forward to end of bath time. I get the child into her pajamas, comb her hair, and let her roam free while I get her cereal ready. I call her name and get no response. As with most kids, silence with E means trouble. I look down the hallway and where is she? Standing in front of the diaper pail with a car in each hand and three cars already in the pail! So as I'm pulling cars out and saying "no! no! no!" she's giving me a look that says, "but Mom! it's so much fun to shove my brother's cars into the diaper pail so that you have to dig around among the urine-filled diapers to find them!" And I thought raising a girl was going to be easy. 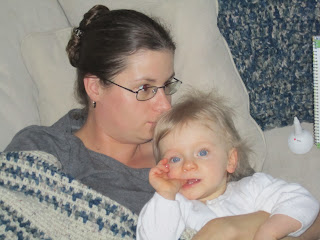 I'm watching the Olympic marathon trials and am floored by the athletic ability of these men and women. The men are running a 5 minute mile at mile 20. Mile 20. At mile 20, I'm forcing myself just to put one foot in front of the other. The women are running about a 5:20 pace. One of the women, Kara Goucher, has a son the same age as my daughter. She looks much better then I do. It's hard not to be jealous.

Half marathon training is going well. I ran a fast 6 miles today; below the pace that I'm aiming to hit during the half so I finished with a big smile on my face. For the first time in a long time I'm in love with running again. I felt a brief spark of love while training for NY but that was quickly destroyed by training 5 days a week. I realize now that I was over training and ignoring the screams from my poor, exhausted body. NY was my dream and I wanted it to be amazing so I ran over a 100 miles a month and was miserable for every step. That's the great thing about running though. There are always other races and new training schedules you can try. You can learn from your mistakes and try again. You can run a shorter distance and gain confidence. This half marathon is my confidence builder. I'm running a relatively light 4 day a week schedule that is leaving me happy and satisfied. 2012 is shaping up to be a good running year.

Have you started running yet? Jogging to the corner and walking back? If not, what are you waiting for? Get up, get out! Come on people, I don't want to run that 10k by myself.
Posted by Lauren at 9:58 PM No comments:

It's a new year and I'm embarking on a new adventure. In July, I offered to watch our friends' soon to be born daughter. At the time, I was all like "I got this. I already have two. How could 3 be any different?" Well, I'm not ashamed to admit that I was wrong. It's not the baby. She's wonderful. A smushy, chunky, ball of baby smiles. She just wants her food and a comfy place to sleep. I can handle that. It's the jealous 15 month old I can't handle.

At first, E was content to pet Baby K like a cat or a small dog. She even offered toys to Baby K when she was fussy. Then it was time to feed Baby K. Those beautiful blue eyes turned a nasty shade of green. Suddenly, E wanted to be on my lap too. Then she wanted to get down so that she could bring me a book and give me this pathetic look that I translated into "Mommy pretty pretty please with a cherry on top will you read me this book because you obviously love that baby more then you love me". Have you ever tried to comfort a crying toddler while feeding an infant? With one hand? I had to use my chin to hold the bottle.

After I put Baby K down for her first nap, E followed me around the house whinging and whining. Between hugs and reading every single "That's not my...." book we have in the house, I was able to get one casserole dish cleaned. All day. One dish. That's all I got done. Thank goodness for husbands and weekends otherwise this house would be like a nasty TLC hoarders episode.

E was in a much better mood when she got up from her nap. I'm sure as the weeks pass she'll get over her jealousy and embrace her role as a "big sister." Let's hope we all survive till then.

You might be wondering where W was when all this was happening. Most of the time he was playing with his trucks except for the 45 minutes he sat on the potty because I forgot he was there. He didn't even go. It's a good thing my kids are cute.
Posted by Lauren at 11:08 PM No comments: